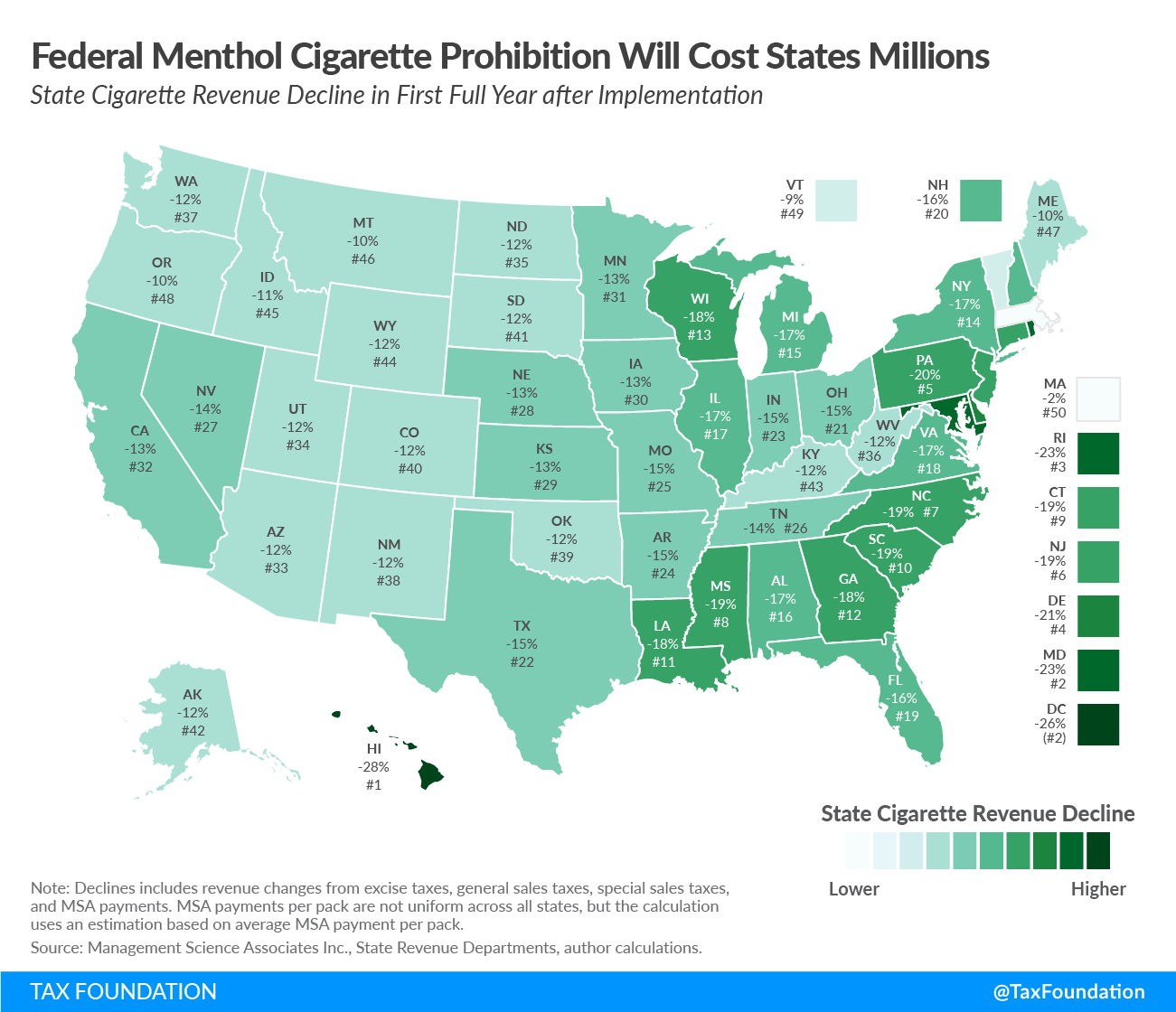 This spring, the United States Food and Drug Administration (FDA) is expected to announce a national ban on menthol-flavored cigarettes and cigars with a characterizing flavor, an attempt to limit tobacco consumption, and, as a result, improve public health. But given the high level of taxation on tobacco products (on average, excise taxes alone make up 40 percent of the retail price), such a move would carry significant revenue implications for both the federal government and state governments, with likely limited benefits in smoking cessation.

Federal action does not only impact federal revenue, and combined, governments stand to lose more than $6.6 billion in the first full year following prohibition.

The Massachusetts ban (analysis here) has not achieved its goals. After one year, sales in the state had dropped by 24 percent, but 90 percent of the decline in sales merely moved to neighboring states. The result of the policy has been a fairly stable level of consumption, but a $125 million decline in excise tax revenue. In other words, Massachusetts is stuck with the costs associated with tobacco consumption, but without the revenue from taxing tobacco products.

Of course, Massachusetts consumers can easily purchase menthol cigarettes in other states, whereas a nationwide ban increases the costs of acquiring the products. But by extrapolating the trends observed in the European Union (the only other region-wide ban), we can offer an estimate of how consumers may react if a nationwide ban is imposed. Approximately 90 percent of cigarette consumers continue to consume but either engage in cross-border trade, switch to other flavored tobacco products, or start smoking non-flavored cigarettes. In Europe, where the menthol consumer group was much smaller, about 8 percent of menthol consumers reported quitting after the ban.

It’s worth noting that the estimates of cross-border trade in Europe (13 percent of menthol smokers) are self-reported (likely underreported due to illegality), and real illicit trade could be significantly higher in the U.S., since the size of the menthol market makes it a much more profitable market for illicit trade.

While cross-border trade would become more difficult with a nationwide ban, there is nothing to suggest that it would greatly hamper the growth of illicit sales—just look at cannabis. Illicit trade is already a major issue in many states and offering competitive advantages to smugglers would only make the issue bigger— especially since all indications are that the FDA will not enforce against possession or consumption.

The following estimates include only cigarettes (which represent more than 90 percent of revenue from tobacco taxes). Cigarettes face a $1.01 a pack federal tax and an average of $1.91 in state taxes. Additionally, cigarettes are generally included in sales tax bases. Moreover, every state receives a cut of the Master Settlement Agreement (MSA), which translates to about $0.75 per pack in 2022.

A nationwide ban would result in a federal revenue decline of $1.9 billion in the first full year after prohibition. In the states, the decline in excise tax revenue would be $2.6 billion, the decline in sales tax revenue would be $892 million, and the decline in MSA payments would be $1.2 billion, for a total state revenue loss of $4.7 billion. A relatively small portion of the revenue loss would be offset by increases in taxes from other tobacco products, which could still be sold flavored. Both state governments and the federal government would experience significant decreases to their tobacco tax revenue without experiencing a corresponding decrease in consumption.

Revenue from excise taxes and MSA payments are commonly earmarked for designated spending priorities. The federal government spends excise tax revenue on health-care costs, and the states spend their revenue on a wide variety of priorities—although rarely enough on cessation programs. MSA payments are a more delicate matter. These payments are based on a calculation of inflationary developments and volume of sales in relation to a base volume and base payment set out in the settlement. When the settlement was reached in 1998, projections for future payments were made based on estimates of market developments, but they have turned out to be overly optimistic. In 2018, the projection was off by $2.7 billion, or roughly 27 percent.

Despite these failed projections, many states rely on this revenue since the payments are supposed to continue in perpetuity (or as long as cigarettes are sold by participating manufacturers). One popular policy has even been to securitize the payments to secure large up-front payments and use the annual payments to pay bond holders. While this arrangement is mostly a risk to the investors, there has been speculation that states could be pressured to meet their payment obligations using general fund revenue in the event of significant MSA payment reductions.

Tobacco excise taxes are already an unstable source of tax revenue. Further narrowing the tobacco tax base by banning a portion of tobacco sales altogether could worsen the instability of this revenue source while driving up the costs of administration and law enforcement associated with the ban, especially if the lost revenue is made up by raising the tax rate on the remaining tobacco tax base.

Government tax coffers are not all that is impacted by this ban, however. Bans impact the large number of small business owners operating tobacco shops, convenience stores, and gas stations. Policymakers and regulators should not lose sight of the law of unintended consequences as they set tax rates and regulatory regimes for nicotine products. The goal is to reduce smoking; the effect may simply be to shift consumers to other products, or to illegally acquired ones.

If the national ban proves even a fraction as ineffective as the Massachusetts ban, it becomes a very expensive exercise in narrowing a tax base, which effectively leaves fewer taxpayers to cover the costs of the externalities associated with smoking. Moreover, the ban will further contribute to the tobacco tax’s lack of stability resulting in some uncertainty for the government programs funded by these revenue streams.

Medicare users still have time to change, drop 2023 Advantage Plan coverage. What to know
Alec Baldwin charged in ‘Rust’ shooting, prosecutors say he was ‘distracted’ during training
Ford is set to report results after the bell. Here’s what Wall Street expects
AMD beats on sales and profit but warns of a 10% revenue decline in Q1
Don’t risk a tax audit. Here are four reasons the IRS may flag your return