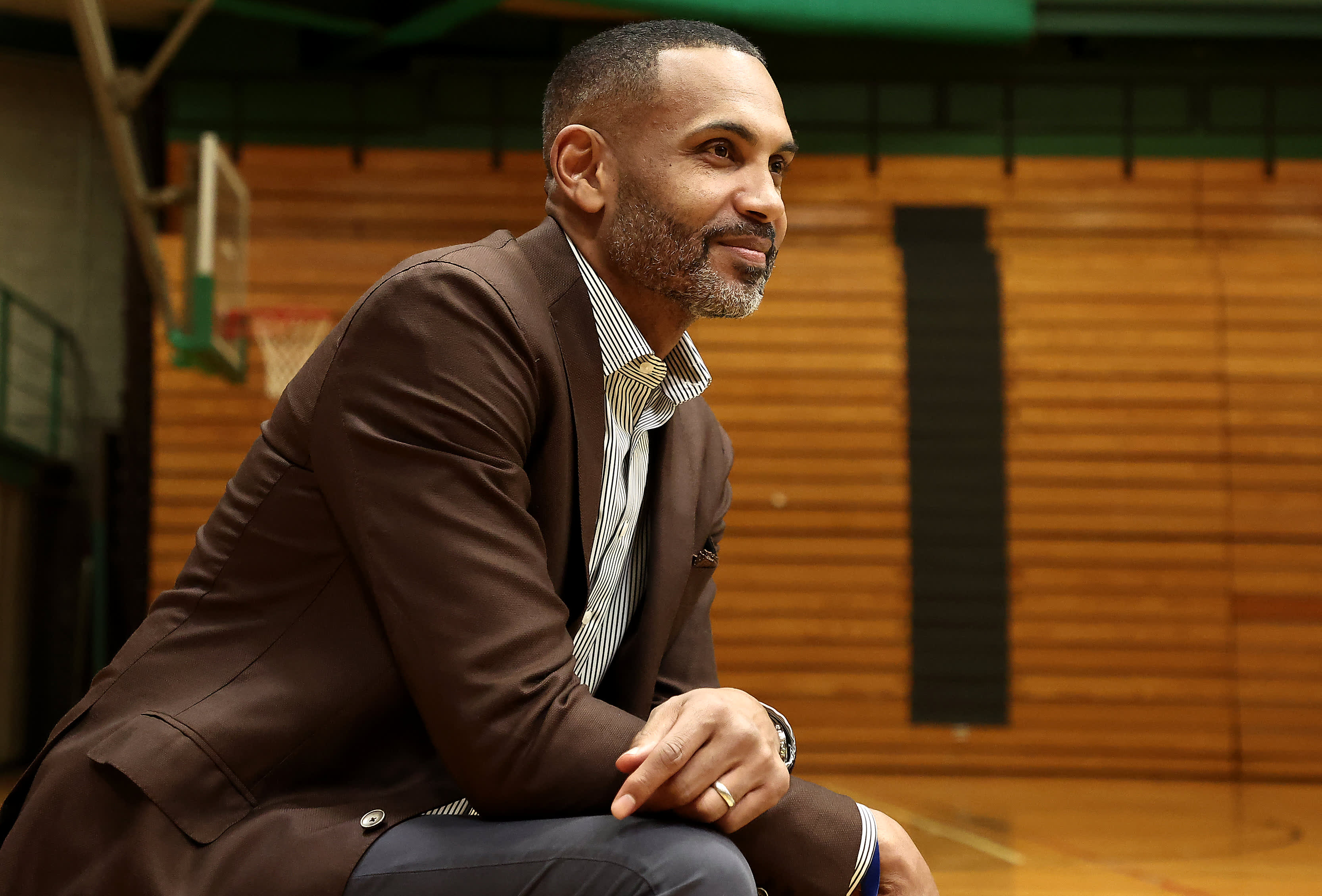 Grant Hill, the former NBA superstar and Duke Blue Devils icon, amassed over $100 million in career earnings. He has invested in several huge real estate projects, including a $5 billion development in Atlanta. He has an ownership stake in an NBA team, and has a new partnership with multinational conglomerate Philips.

But the 1994 Detroit Pistons first round pick is still paranoid about money – a mindset that persists from his days on the NBA court.

“I was always thinking about when the game was over,” Hill said about how he would budget during his playing days, with an eye on life after retirement. “And I think that served me well.”

Hill, 49, spoke to CNBC on Tuesday to discuss his new promotion arrangement with Philips’ razor products around the 2022 NCAA men’s basketball tournament, which starts March 17. He also works as a basketball analyst for Turner Sports’ NBA and NCAA games.

The interview was supposed to last only 15 minutes, but ended up stretching beyond 45 minutes as Hill discussed his investments, his continued involvement in the NBA and his unending curiosity about business in general.

Here’s how Hill navigated his finances and built a promising business portfolio off the court.

After he was drafted, one of Hill’s most notable decisions was electing not to hire a sports agent to negotiate deals. Hill said he doesn’t believe in paying an agent a percentage of his contracts to talk on his behalf. Basketball agents can charge up to 4% to players to settle contracts and earn more if they lure brand deals to clients.

Hill, who played for four teams over the course of 19 NBA seasons, recalled his first contract was an eight-year $45 million deal in 1994. That was negotiated by attorney Lon Babby, who had experience as the Baltimore Orioles general counsel and became Phoenix Suns president of basketball operations.

“Essentially, we’re CEOs of our own companies,” Hill said, referring to professional athletes. “And CEOs don’t typically hire agents and pay them a percentage. They work with lawyers, and they have attorneys that help them negotiate and vet deals for you. And to protect your interest in contracts. So, I went that route with representation.”

Babby, who charged Hill an hourly rate, helped negotiate a $93 million deal with the Orlando Magic in 2000 and set up a marketing division that secured deals from brands such as McDonald’s and Coca-Cola’s Sprite. Sports apparel company FILA signed Hill to a lifetime deal in 2018.

Grant Hill #33 of the Detroit Pistons stands at the line to shoot a foul shot against the Washington Bullets during an NBA basketball game circa 1994 at the US Airways Arena in Landover, Maryland. Hill played for the Pistons from 1994-2000.
Focus On Sport | Getty Images Sport | Getty Images

By taking control of his business early in his career, Hill said he learned by “sitting with the executive leadership team, going over marketing campaigns – visiting ad agencies to develop a strategy.” He also studied the business section in newspapers to learn about money and “kept things simple” when it came to spending.

“I didn’t change my lifestyle,” Hill said. “I didn’t go out on a shopping spree. I didn’t buy a car. I had a relationship with General Motors, and they gave me a couple of cars.”

Hill, who played until age 40, was elected to the Pro Basketball Hall of Fame in 2018 and sits on the organization’s board. He is also a member of the NBA Retired Players Association board of directors. In January 2021, Hill was named the new managing director of the U.S. men’s national basketball team.

Hill said he first became “paranoid about money and about losing money” after watching athletes struggle with money after their careers ended. Hill’s father – former Dallas Cowboys running back Calvin Hill – played in the NFL from 1969 through 1981, so he saw some players deal with financial woes up-close.

I didn’t change my lifestyle. I didn’t go out on a shopping spree.
Grant Hill
businessman and retired NBA star

That thinking is reflected in his involvement in real estate investment.

Hill praised his parents for developing an interest in the sector. He recalled entering the space in 2000, during his time with the Magic. Hill invested in multi-family units and office space buildings in central Florida, a region he described as “prime for growth, and has been growing tremendously since that time.”

Through his marketing and management company Hill Ventures, the former NBA All-Star invested and developed over $200 million in projects throughout Florida in North Carolina.

In his latest venture, Hill joined commercial real estate investment firm CIM Group to invest in Centennial Yards, a $5 billion mixed-use development in Atlanta. Hill said the downtown project would take seven to 10 years to complete. he compared it to L.A. Live, an entertainment and residential development outside Crypto.com Arena in Los Angeles.

Hill is one of the many athletes to profit from real estate investing post-career.

Several top-tier athletes are getting into cryptocurrency investment, but Hill is skeptical of whether the asset class is sustainable. Again, for Hill, it comes back to hard assets.

“There’s been great fortunes that have developed through real estate, and it’s a part of allocating assets,” he added. “I think it’s a safe bet, but I also think a profitable bet, compared to some of these sorts of new digital currencies that exist.”

Ballboys wear gloves while handling warmup basketballs as a precautionary measure prior to an NBA game between the Charlotte Hornets and Atlanta Hawks at State Farm Arena on March 9, 2020 in Atlanta, Georgia.
Todd Kirkland | Getty Images

Hill also has sports properties in his portfolio. He’s an investor in the NBA’s Africa business, which is valued at $1 billion, and a minority stakeholder in the NBA’s Atlanta Hawks.

Hill took an equity stake and vice chairman role in 2015 when he joined businessman Tony Ressler to buy the team for more than $800 million. The Hawks are now worth $1.6 billion, according to Forbes.

Hill didn’t reveal his total stake in the NBA franchise. “It’s an investment, and Tony Ressler can treat me like an investor, but he treats me like a partner,” he said. “That’s something that I truly value and appreciate.”

Previously, Hill and fellow investors $1.2 billion bid for the Los Angeles Clippers in 2014 didn’t stack up to the offer from former Microsoft CEO Steve Ballmer, who paid $2 billion for the team.

“I think if you buy good art, and you have a good eye, and you know what you’re doing, there can be a lot of money that is made,” Hill said.

Celebrity Net Worth, a website that tracks athletes and celebrates, estimates Hill made roughly $120 million from endorsements. Hill is also gaining experience in the consumer packaged goods sector as a board member of New Jersey-based Campbell Soup.

Hill is also helping Philips lure first-time shavers with its Norelco OneBlade line. Terms of Hill’s endorsement with Philips weren’t made available. Philips is traded on the New York Stock Exchange and has a market cap of $28 billion.

“You look for companies that are credible,” Hill said of how he approaches endorsement deals with brands. “Companies that have a history of success; ultimately embody the quality and characteristics that you stand for.

Hill played for legendary Duke coach Mike Krzyzewski. The iconic coach is retiring from the program after 42 seasons and five NCAA Division I championships. Two of those title teams, 1991 and 1992, featured Hill.

“To celebrate him, to celebrate his legacy – to see players from multiple decades come back, it was special,” Hill said.

And he thinks the Blue Devils are going to go all the way this year. Duke won its last NCAA championship in 2015.

“We’ve been due,” Hill said. “Hopefully, we can send Coach K off with another championship.”

‘The IRS is not the boogeyman.’ Here’s what to do if you still can’t pay your taxes
Mortgage refinancing drops to a 22-year low as interest rates surge even higher
8 million student loan borrowers will get automatic forgiveness. Here’s what you need to know
These are the best ways to give to charity for the ‘vast majority of people.’ Here’s how to pick the most tax-efficient strategy
Bed Bath & Beyond reports 28% drop in sales as it presses ahead with turnaround plan