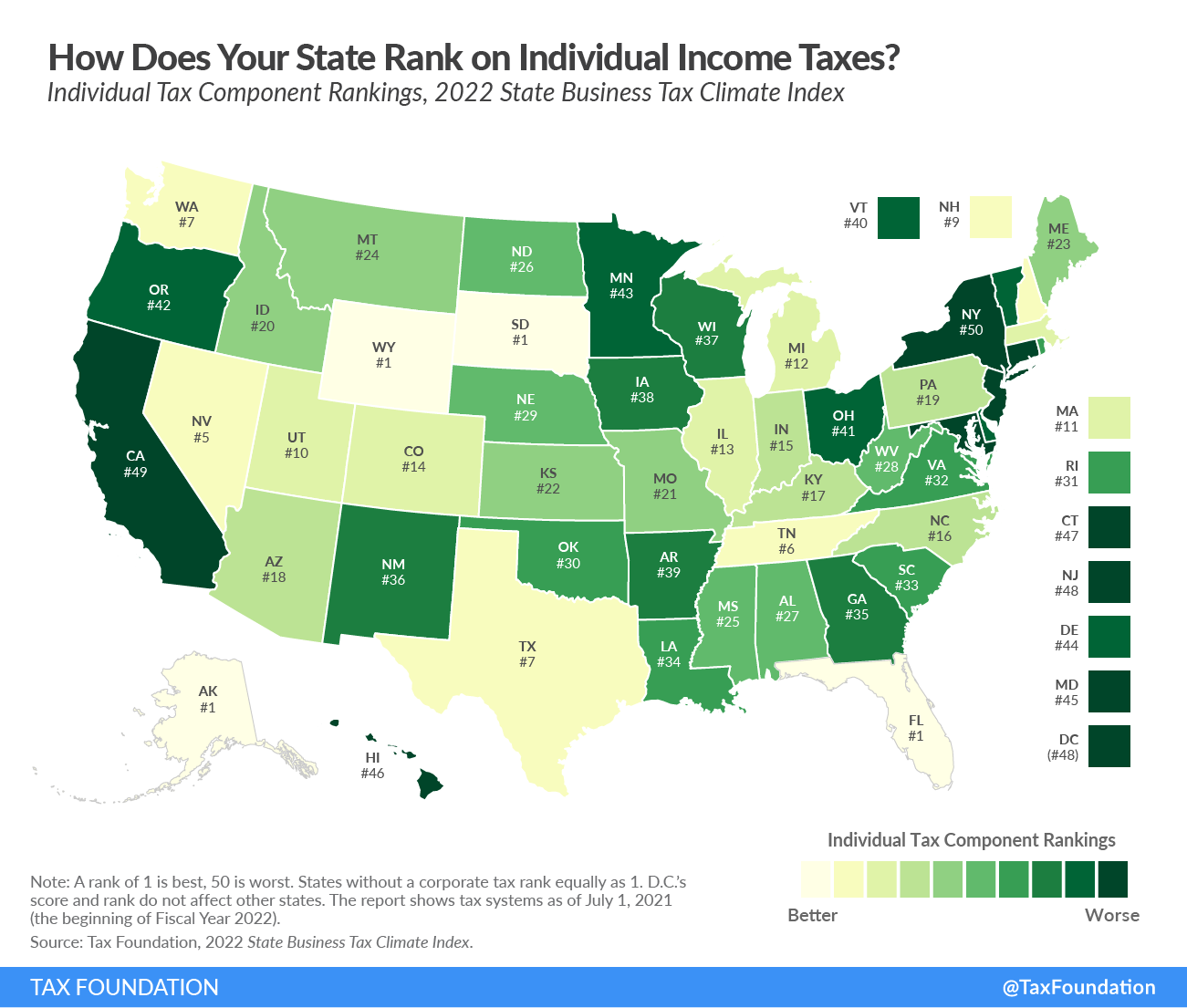 States that score well on the Index’s individual income tax component usually have a flat, low-rate income tax with few deductions and exemptions. They also tend to protect married taxpayers from being taxed more heavily when filing jointly than they would be when filing as two single individuals. In addition, states perform better on the Index’s individual income tax component if they index their brackets, deductions, and exemptions for inflation, which avoids unlegislated tax increases.

States with a perfect score on the individual income tax component (Alaska, Florida, South Dakota, and Wyoming) have no individual income tax and no payroll taxes besides the unemployment insurance tax. The next highest-scoring states are Nevada, Texas, Washington, Tennessee, and New Hampshire. Nevada taxes wage income at a low rate under the state’s Modified Business Tax but does not tax investment income. New Hampshire taxes interest and dividend income but not wage income. Tennessee, Texas, and Washington do not tax wage income but don’t receive a perfect score on this component because they apply their gross receipts taxes to S corporations, which, in most states, would be taxed under individual income tax codes. (Washington and Texas also apply these to limited liability corporations.) Other states that score well on the individual income tax component are Colorado, Illinois, Indiana, Kentucky, Massachusetts, Michigan, North Carolina, and Utah, because they all have a single low tax rate.

States that score poorly on this component tend to have high tax rates and very progressive bracket structures. They generally fail to index their brackets, exemptions, and deductions for inflation, do not allow the deduction of foreign or other state taxes, penalize married couples filing jointly, do not include LLCs and S corporations under the individual income tax code (instead taxing them as C corporations), and may impose an alternative minimum tax (AMT). The poorest-performing states on this year’s individual income tax component are New York, California, New Jersey, Connecticut, and Hawaii.

High marginal rates adversely affect labor output and investment, and can influence location decision-making, especially in an era of enhanced mobility, where it is easier for individuals to move without jeopardizing their current job, or without limiting the scope of their search for a new one.

Click here to see an interactive version of states’ individual income tax rankings, and then click on your state for more information about how its tax system compares regionally and nationally.

To see whether your state’s individual income tax structure has moved up or down in the ranks in recent years, check out the table below.

Hong Kong services to rebound as China reopens, but UBP says sector is coming from ‘fragile situation’
Stocks making the biggest moves midday: Meta, Align Technology, Coinbase, Eli Lilly and more
The Federal Reserve is likely to hike interest rates again. What that means for you
Senators push for airline passenger protections after holiday travel meltdown
64% of Americans are living paycheck to paycheck — here’s how to keep your budget in check