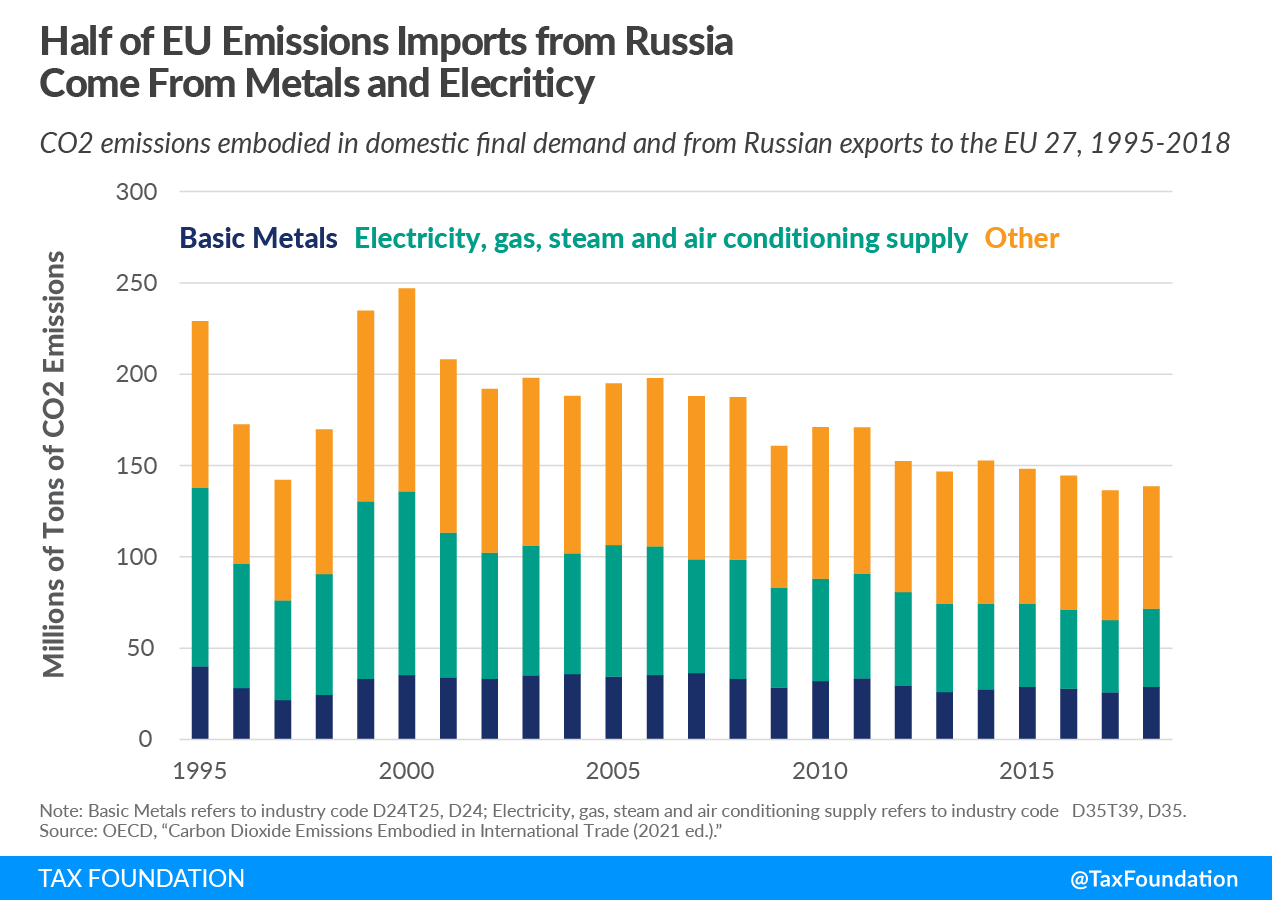 The Council of the EU agreed this week on a general approach to the European Commission’s Carbon Border Adjustment Mechanism (CBAM) proposal. The mechanism is a key aspect of the EU’s broader Fit for 55 package which aims to cut 55 percent of net greenhouse gas (GHG) emissions in the EU by 2030. It’s also a foundational aspect of the Commission’s new own resource proposal to fund EU budget initiatives. However, Russia’s war in Ukraine could destabilize these financing plans.

In 2005, the EU implemented a domestic carbon pricing mechanism called the Emissions Trading System (ETS). This cap-and-trade mechanism sets a cap on the amount of emissions that are allowed to be expelled into the air by firms. The market price of carbon is then set by “cleaner” firms trading allowances to more carbon-intensive firms.

CBAM is designed to complement the ETS by placing a carbon price on certain imports into the EU from third countries such as Russia or the United States that do not tax carbon at an EU-approved level. The goal is to maintain the competitiveness of European producers relative to foreign producers and prevent “carbon leakage.”

A border adjustment requires two elements. One is a fee charged on imports, and the second is a crediting mechanism for exports. To this point, CBAM design has primarily focused on the former. In theory the CBAM would increase the cost of importing products into the EU from countries that do not levy a carbon tax while providing a rebate or credit for carbon taxes paid by EU exporters on the goods they sell outside the union.

So far, the European Commission has primarily focused on a border tariff.

The EU hopes this border tariff will inspire other countries without a carbon tax to implement their own. Once third countries link their national carbon pricing systems to the EU’s, third-country exporters would no longer face CBAM payments.

The price of the border tariff would be calculated based on the weekly average price of ETS auctions. By doing so, the price foreign producers would pay for carbon emissions would equal the price European producers pay without the administrative burden of daily calculations.

From a budgetary perspective, the Commission has proposed that 75 percent of CBAM revenue go to the EU’s budget as a new own resource while 25 percent goes to the Member States. Commissioner Johannes Hahn said that CBAM revenues, along with new own resources from Pillar 1 of the OECD agreement and ETS reform, will provide a “steady stream of revenue to repay the NextGenerationEU COVID-19 recovery plan” passed in 2020.

The Commission estimates CBAM revenues to be around 1 billion euros per year from 2026-2030. During the transition and information-gathering phase from 2023-2025, CBAM is not expected to raise revenue. However, Russia’s war in Ukraine could impact the stability of CBAM as a new own resource for the EU budget.

For one, Russia is a major trading partner with the EU in carbon-intensive goods. GHG emissions embodied in EU final demand from Russia represent 14 percent of all GHG emissions imported by the EU at 138.6 million tons of GHG emissions. A bit more than half of those come from the electricity sector (31 percent) and metals (21 percent).

Nearly 17 percent of imports covered by the current CBAM proposal would come from Russia, the most of any country. In terms of the share of EU imports, Russia is the top exporter in iron and steel (14.6 percent) and fertilizer (33.1 percent) and the second highest in aluminum (17.6 percent).

It is difficult to calculate the exact amount of potential CBAM revenue which will be impacted, but it is safe to say that trade disruptions between Russia and the EU would negatively impact the EU’s budget. Additionally, a post-war Ukraine in need of repair may not trade with the EU at the same levels as before.

Exporters to the EU will not be required to begin paying until 2026, but if the war in Ukraine or its aftermath limit trade relations in years to come, the Commission’s 1 billion euro-a-year estimate would need to be revised.

Secondly, there is a correlation between a persistent increase in gas prices and an increase in the EU’s carbon price. This is because as gas prices increase, electricity generators are encouraged to use more polluting coal-fired power and thereby, increase demand for carbon permits.

Now that the Nord Stream 2 pipeline between Russia and Germany has been put on hold, and further EU sanctions against Russian oil and gas seem likely, the price of gas in the EU is almost certainly going to be persistently higher over the short to medium term. Even if the EU’s newly announced REPowerEU agenda delivers a quicker end to reliance on Russian energy, it is not clear what the transition will do to prices. It is hard to see, however, how prices would decrease in the medium term during such a disruptive and expensive transition.

While increased carbon prices could mean increased CBAM revenue over time, this is not guaranteed. The war and its related consequences create a volatile market dynamic. Furthermore, because a majority of CBAM revenue relies on a handful of countries, Russia amongst them, any loss of revenue from Russian imports would place a heavier burden on exporters from other countries if the EU wanted to raise the same level of revenue. This could also change the way those countries trade with the EU, and how much revenue the EU can expect to raise.

Given the uncertainty surrounding the war in Ukraine, future trade relations with Russia, and the overall CBAM revenue structure, the EU should carefully reevaluate any plans to spend CBAM revenue in the future. The mishandling of a relatively small billion euros per year may not endanger the soundness of the EU’s budget in the long term. However, as the EU looks to increase its role in fiscal affairs through new own resources, it would be wise to show that it is capable of adjusting policy in a prudent manner when challenges arise.

The Bottoms In For Housing!
The Federal Reserve is likely to hike interest rates again. What that means for you
Goldman Sachs CEO David Solomon gets 29% pay cut to $25 million after tough year
A 10/10 Buffett Gem
Here’s who can claim the home office deduction on this year’s taxes