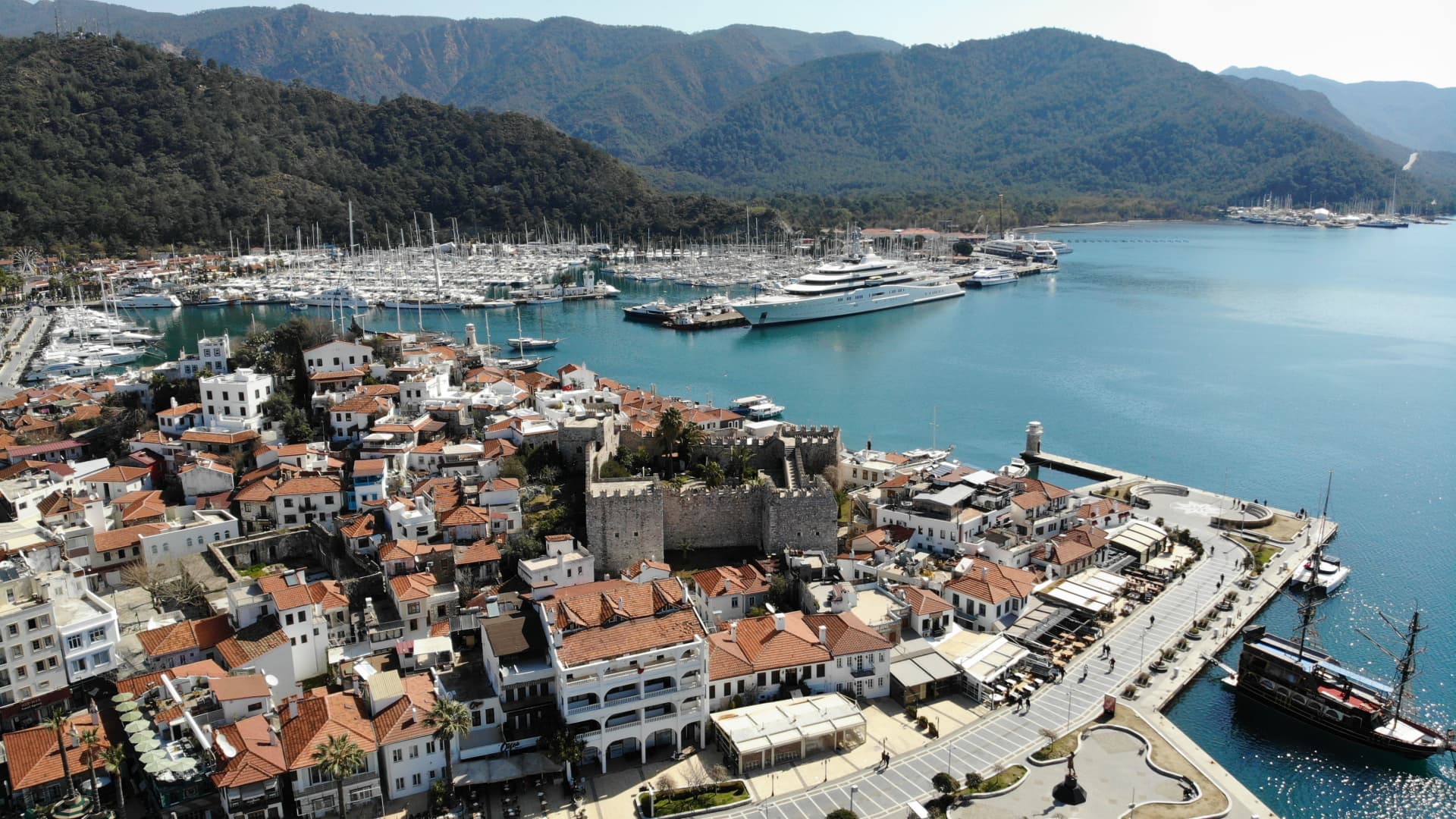 Russian oligarch wealth is on the hunt for a new home, and Turkey is quickly establishing itself as a welcome host.

Turkish Foreign Minister Mevlut Cavusoglu told CNBC Saturday that he’d welcome sanctioned Russian oligarchs into the country as both tourists and investors, as long as their business dealings adhered to international law.

It came a day after President Recep Tayyip Erdogan said that “certain capital groups” could “park their facilities with us,” in what was seen as a direct reference to the recent arrival of several Russian-owned luxury assets in Turkey, including two luxury yachts and a private jet belonging to billionaire Roman Abramovich.

The comments have sparked speculation that Turkey — a non-EU country but a NATO member — may be actively encouraging investment from blacklisted billionaires as it seeks to shore up its embattled economy. Already, wealthy Russians are actively seeking investments there, according to Reuters reports.

But any prospective gains could be short-sighted for a country orchestrating a delicate balancing act between Russia and the West.

“Attracting Russian money could hurt Turkey in the long-term,” Defne Arslan, a senior director at the Atlantic Council in Turkey and former economist for the U.S. Embassy in Ankara, told CNBC.

Turkey is seeking to tread a fine line in the ongoing war in Ukraine.

While strongly criticizing Moscow’s unprovoked invasion, it has stopped short of implementing sanctions like those imposed by the U.S., EU, U.K. and others, saying it opposes them on principle.

Instead, it has adopted the role of a neutral mediator, facilitating peace talks between Russia and Ukraine. Negotiations in Istanbul on Tuesday appeared to raise hopes of a breakthrough after Moscow agreed to cut its military assault on Kyiv and Chernihiv, while Ukrainian negotiators proposed adopting neutral status in exchange for security guarantees.

If they’re parking their yacht, that’s OK. But Ankara will be very cognizant about Turkey becoming grounds for sanctions.
Emre Peker
director and Turkey specialist at Eurasia Group

Turkey’s stance of nominal neutrality is largely understood given its close economic and diplomatic ties with Russia, particularly regarding energy, defense, trade and tourism. As such, Western allies have not pressured Turkey to join sanctions, nor are they likely to punish it for not doing so.

That makes it a legitimate outpost for assets belonging to sanctioned Russians. Indeed, an influx of foreign investment and luxury assets could provide a boon for the beleaguered Turkish economy, which slipped into crisis mode last September as unorthodox interest rate cuts pushed already spiraling inflation higher.

“If they’re parking their yacht, that’s OK,” Peker said. “But Ankara will be very cognizant about Turkey becoming grounds for sanctions and will be careful to prevent that.”

The Turkish Embassy in London did not respond to CNBC’s request for comment.

Turkey can scarcely afford to be hit with secondary sanctions given the pressure that the war and resultant Russian sanctions have already inflicted on its economy.

Last month, inflation soared to a 20-year high of 54.4% amid a crash in the lira and soaring commodity prices. Data fully reflecting the impact of the war are yet to be released.

“The ramifications are clear,” he continued. “Inflationary pressures are higher, destabilizing the Turkish economy. The fallout of sanctions will curtail or halt tourism from Russia and Ukraine, which accounted for about one-third of inbound tourism. And it will affect Turkish investment into Ukraine and Russia.”

Meantime, Erdogan is keen to uphold Turkey’s reputation as an independent mediator in the ongoing conflict, seeking to win favor both at home and abroad ahead of elections in 2023.

“Erdogan is desperate to get through to the elections next year,” Timothy Ash, senior emerging markets sovereign strategist at BlueBay Asset Management, told CNBC.

An advertisement for Starbucks seen on the motorway near Istanbul on Tuesday, 17 October 2017.
Nurphoto | Getty Images

Still, there are opportunities for Turkey to shore up its economy and benefit from the movement of wealth from Russia without drawing political and economic ire.

That includes attracting investment from some of the 450 Western brands that have so far withdrawn from Russia, according to the Atlantic Council’s Arslan.

“If it plays it right, I think it can be a huge opportunity for Turkey, not only staying in line with Western allies but potentially attracting investment from foreign companies,” she said, highlighting the similarities between Russian and Turkish geography and production lines among other factors.

Indeed, Erdogan said last week that Turkey’s “door is open” to companies looking to relocate their business outside of Russia.

“Not only American companies, but also many brands and groups from around the world are leaving Russia. Of course, our door is open to those who come to our country,” he said.